A Polish Woman and a Spanish Woman

Two women pleaded guilty to brothel keeping in Knockvicar, Co. Roscommon in 2010. The court heard the women, one Spanish and the other Polish, rented a house and advertised their services on an escort website. Neighbours became suspicious and reported their concerns to the Gardaí who put the property under surveillance. Gardaí observed a string of male callers, before moving in to raid the house and seize €1,700 in cash believed to be their takings. The women had been operating for 3 days. Garda sources said there was no evidence that the women were working for an organised prostitution ring. They believe they were most likely working for themselves. The women received a fine. 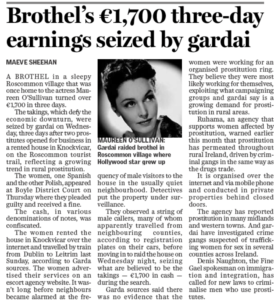