Adriana C. (25) and Carmen C. (22), both Romanian nationals, were charged with running a brothel at an address in Cavan. Their solicitor and a Garda witness agreed their families in Romania were destitute and they’d come to Ireland to try to make money. Carmen C. was found with a sum of €415 on her person and Adriana C. had €355, money which they admitted was the proceeds of prostitution. They also had documentation showing they’d intended to fly home. The judge ordered that the money, plus a further €20 from Adriana C., be paid to Sr. Julie Doran of the Sisters of Our Lady of Apostles who works with destitute women. 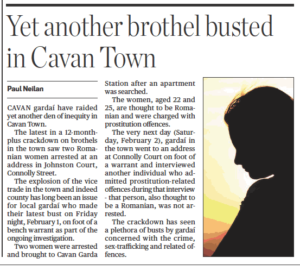