Adriane N. (38), Elena F. (35) and Giorgiana C. (34), all Romanian nationals, were arrested at their apartment in Letterkenny, Co. Donegal on 27 November 2016 following a week-long undercover investigation. Also arrested at the apartment was Giorgiana C.’s brother, Mihia M. A Garda witness said all four admitted prostitution was taking place in the apartment. Mobile phones, laptop computers and €1,470 in cash was seized. The court was told that the women were not being trafficked but we working for themselves and were sending the money back to relatives at home. The women were supporting their children and in one case a sick relative who needed a serious medical operation. The court was told that Mihia M. had only arrived in Ireland recently and there was no evidence to suggest he was putting any undue pressure on any of the women to take part in prostitution. A solicitor for all four said they were victims of poverty. The judge ordered the destruction of the mobile phones, laptops and also ordered the seized cash of €1,470 be given to the State. He then applied the Probation Act to all four defendants. 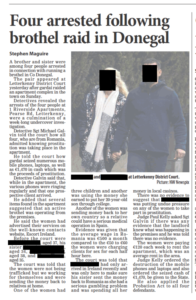