Adrina P. (25) and Ana T. (20), both Romanian nationals, were charged with brothel keeping at an address in Newbridge, Co. Kildare on 22 November 2018. It was reported that this case came about as a result of an “Operation Quest” anti-prostitution operation. Adrina P. and Ana T. appeared in Naas District Court on 6 June 2019 for sentencing. On that date Gardaí gave evidence the two women were operating a brothel where they were the two prostitutes. After Gardaí conducted surveillance they entered the premises with a search warrant, where upon the two women admitted they were prostitutes and signed statements to this effect. No clients were present and nor was any significant money found. The women had come to no further Garda attention since this date and one of the women was now expecting a child with her partner. The women’s solicitor told the court that they had a sum of money available that could be paid to a charity, and were hoping to return to Romania, after the conclusion of the case, and to avoid bringing any further embarrassment to their families. However, the judge was not inclined to accept this proposal, reportedly commenting “They weren’t forced into this position”. He sentenced them both to nine months in prison. Adrina P. lodged an appeal. 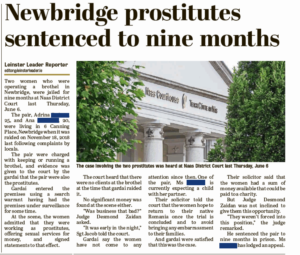