Allison J. and Jodie B.

Allison J. (45) and Jodie B. (39), both UK nationals, pleaded guilty to operating a brothel at a hotel in Tralee on 31 October 2010. Gardaí had gone to their hotel after being contacted about suspicious activity and discovered the two women in adjoining bedrooms, both with men. Both admitted they were selling sex and the men also admitted they were buying sex. The women had checked in the previous day. Their solicitor said Allison J. was a separated mother of three who became involved in “this business” after she answered a newspaper advert seeking a receptionist in the UK. Jodie B. had become involved through contact with a friend and decided “to try it out”. She was going through a very difficult time in her life and her mother was very ill with cancer. The court heard the women’s “agency” took a “huge slice” out of what the women were earning and they actually made relatively little profit from their activities. Both were fined €450. 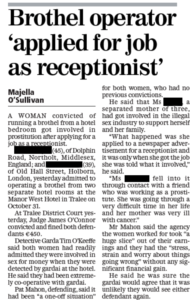 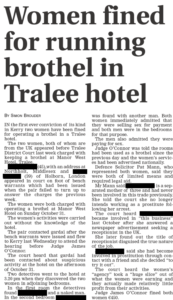