Amiko P. (25) and Aurora Gabriela R. (30), both Romanian nationals, were charged with keeping a brothel in Sligo on 3 November 2013. A Garda witness gave evidence the women were working for someone else. €340 had been seized from the women by Gardaí. The judge acknowledged the women were sad cases from poor backgrounds and agreed to deal with the matter by way of a €300 fine each. 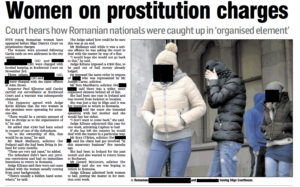