Ana Christina D. S. (31), Joiceline C. D. S. (32) and Marcia D. S. (40), all Brazilian nationals, pleaded guilty to running a brothel out of their apartment. The court heard 6 mobile phones, a laptop and €500 was seized during the police raid. A Garda witness gave evidence the women were “pawns” of a bigger operation. Defence counsel said the three women had families back in Brazil to whom they sent money. He said they all had origins in deep poverty. All three received six-month suspended prison sentences and were ordered to be of good behaviour for 12 months. The judge gave them 72 hours to get out of Limerick and said the €500 cash could be used to assist them to leave the jurisdiction. 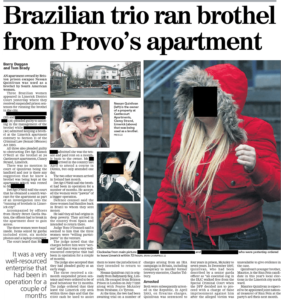