Andrea A. (19), Elena V. (30) and Simona U. (27), all Romanian nationals, were arrested after a raid on their apartment in Dundalk, Co. Louth on 18 July 2015. The women each admitted a charge of brothel keeping. The court heard Gardaí had been keeping surveillance on the apartment complex and saw there were “callers on a regular basis”. After the raids all the women admitted getting paid for sex and being escorts. None of the defendants had previous convictions. A solicitor for the women said while they were the occupants of the apartment, they were not responsible for the letting of the property or the parties that organised the matters at the apartment. He said the women all intended to return to Romania, some within the following 24 hours, and all within the next week. He further said that Gardaí accepted that each woman is a very vulnerable person and some of them are mums to children in Romania. He said his clients undoubtedly were exploited and were not involved in the organisation of what transpired in this address and each was vulnerable in their own right. The judge imposed a 14-day prison sentence, but suspended it for a fortnight. That was, he said, on the basis that he had been told women were leaving Ireland within the next two weeks. The women were allowed the return of personal items seized but not mobile phones. 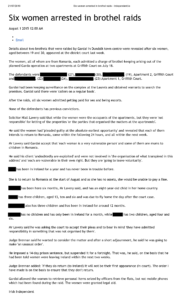