Andrea D. (27) and Jana D. (33), Czech nationals, sisters, both described as prostitutes, were brought before the court for brothel keeping following a Garda search of an apartment in Sligo. The court heard Gardaí had seized €2,775 from them. Their solicitor said they had come to Ireland looking for work and found themselves “engaged in this industry” and were now embarrassed and anxious to return home. The judge said Gardaí should buy them one way tickets out of the €2,775 seized and accompany them to the airport to “see them on their way”. The case was adjourned and the judge said if they had left the country when it came before him again he’d “deal with the matter in a certain way” and the money left over could be dealt with by a Police Property Application. At a later court date the judge directed the remaining €2,020 be forfeited to the state, and struck out the charges against them without prejudice. In this case it appears Andrea may have been prosecuted for living on the earnings of prostitution and Jana for brothel keeping. 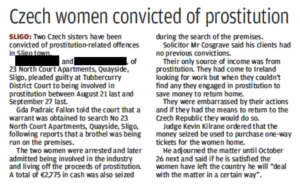 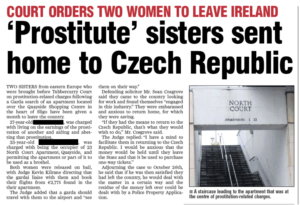 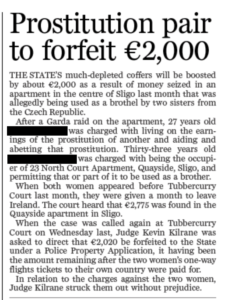