Maria V., Miheala N., Andrea M.H. and Florea M. all pleaded guilty to knowingly permitting a premises to be used as a brothel. The court heard they were arrested in two different apartments following an investigation into prostitution in Letterkenny. A Garda witness said their apartment complex had been under surveillance for some time. €5,800 euro and £410 cash was seized in one apartment, which Andrea M.H. who had been in Letterkenny for 5 months admitted was the proceeds of prostitution. Smaller amounts of money were seized from the other women. Their solicitor said all four were vulnerable women preyed upon by other parties and had come to Ireland out of circumstance and necessity to support their families in Romania, including parents, children and disabled relatives. None of the women had previous convictions and all indicated they wanted to go home. The judge convicted them and ordered them to enter a 12-month peace bond on condition they leave Ireland immediately. The judge gave each woman €300 euro out of the seized money to pay for travel expenses commenting “they are getting a very good deal”. The women were reported to be holding hands and weeping as the judge gave his directions. Two other persons, Camelia U. and Ionel B., a husband and wife and also Romanian nationals, were reported to have also been charged with brothel keeping following these apartment raids. However, their cases were not immediately dealt with as they did not plead guilty, and it is not clear what their alleged roles were, though one article suggested they may have had a management role. 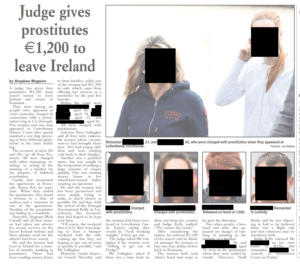 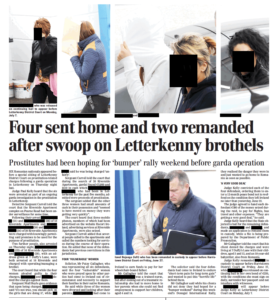