Andrea P. (22), Anna L. (24) and Ionuit B. (26) pleaded guilty to brothel keeping in Sligo on dates in October 2010. A Garda told the court they were put under surveillance and a plain clothes Garda had been offered sex for €200. In their apartment a selection of industry paraphernalia and €1,255 in cash was found. There was no evidence of any participation or oversight in the business by a third party. It was said that the three were very nervous and held hands throughout the proceedings. The women’s solicitor explained they were “entirely co-operative” but in financial difficulties. “This was basically an operation to try and earn some money for themselves” he said. The judge ordered they pay €900 from the confiscated €1,255 to a charity “as a collective donation”, and the balance to be returned to them. He also ordered they sign a peace bond for two years. 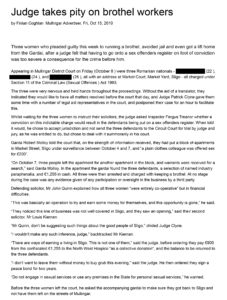