Andree R. (22) and Florina C. (18), both Romanian nationals, appeared in court charged with brothel keeping at an apartment in Drogheda, Co. Louth on 2 September 2011. The women said through interpreters they were third-level students and planning to return to Romania to continue their studies. The judge gave both women a one week’s suspended sentence and ordered them to return home within the next month. 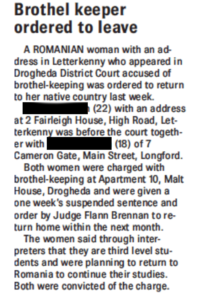