Andreea T. (22), a Romanian national, pleaded guilty to brothel keeping in Sligo on 13 September 2010. The court heard that surveillance on an apartment in Sligo was carried out by Gardaí over a number of days. Men were observed entering and exiting and they subsequently made statements in which they said they had paid to engage in sexual acts. When Gardaí entered the apartment there was one woman present, Andreea T. A number of laptops along with condoms and sexual toys were also found. A sum of €1,000 was seized. Gardaí told the judge Andreea T. was a “worker”. Andreea T.’s solicitor said his client was a “small fish” brought in by “bigger players” operating behind the scenes, had no financial means and wanted to leave as soon as possible. The judge imposed a fine of €200 and ordered that the €1,000 seized be forfeited to the State with whatever amount was necessary to help her leave the country to be taken from that sum. 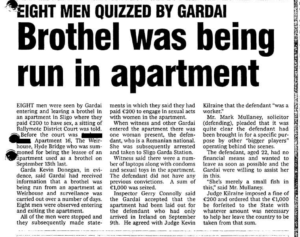