Aneldy S. S. (32), Josefa Maria D. S. (36), Michelle D. P. (28), Monica A. D. L. (34), Sarah Silviane D. R. (22) and Suely T. D. S. (40), all Brazilian nationals and all of no fixed abode, pleaded guilty to brothel keeping at an address in Limerick on 11 November 2009. The court heard Gardaí had arrested the six women, who had arrived in the country less than a week earlier, at an apartment in the city. The defence solicitor said all of his clients were of no fixed abode and were not the ringleaders of the operation. A Garda told the court that the women were in various states of undress when the premises was raided, laptops and mobile phones were also seized, and all six women made full admissions to Gardaí and outlined the services provided and the prices charged. The court heard some of them were in possession of tickets to fly home in the coming week and all six intended to return to Brazil. The judge sentenced all six to two months in prison, but suspended the jail terms for six months provided they are of good behaviour. 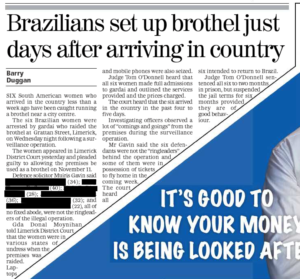