The court heard Gardaí had arrested Anna Maria P. (21) and Mihaela G. (19), both Romanian nationals, in their apartment in Cavan on 16 September 2012. Anna Maria P. was not in court as she had already returned home to Romania. A Garda witness gave evidence the women had admitted brothel keeping. He said the women were self-employed and had made very little money. Mobile phones, cigarettes, a notebook and a USB pen were returned to Mihaela G. in court, while a sex-toy, confiscated at the time of the raid, was ordered for destruction by the State. With €80 confiscated from the black notebook and a further €250 present in court with Mihaela G., the judge accepted the sums, splitting it €160 against Mihaela G. and €170 against Anna Maria P., striking out the charges against them. 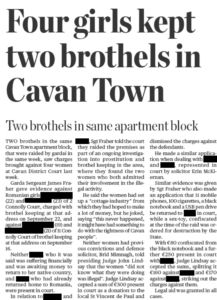