Aurelia C., a Romanian national, and Gabriela S., also a non-national, were charged with keeping a brothel at their apartment in Cavan on 7 May 2012. Warrants were issued for their arrest when they failed to appear at a court date. Aurelia C. later appeared and pleaded guilty. A Garda witness told the court he and several other Garda officers had entered the apartment and found the women who admitted they were working as prostitutes. They also found £200 and a number of mobile phones which were seized. He said the women had only been in Cavan a short time and had set up “a little cottage industry of their own”. The court heard Aurelia C. had since moved to Belfast. The judge said once the £200 had been converted to euro, €200 should be donated to Drumcrave NS and the remainder given to the Garda Social Fund. No further information could be found re Gabriela S. 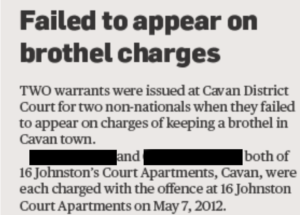