Bianca D. (22), a Romanian national, and two other women (Elizabeta L. and Loiza H.) were charged with managing a brothel at an address in Dundalk, Co. Louth in 2011. Further updates on Elizabeta L. and Loiza H. were not found. Bianca D. was found guilty after trial. The court heard Gardai raided the apartment and seized items including a whip, 4 18-packs of condoms, lubricant, 7 mobile phones, €120 cash, a laptop and massage oil. The court was told Bianca D. had began working as a prostitute after falling into financial difficulties. Her counsel said she was trying to support her mother, sister and grandparents. She aspired to move on from this and didn’t want people to know of this aspect of her life. The court heard she had a previous conviction for brothel-keeping in Northern Ireland. The judge said he was satisfied this was not organised crime. The judge imposed an 18 months suspended sentence on each charge. 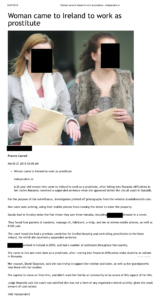