Claudia P., Elena A., Margareta V., Mariana C. and Paula L., all Romanian nationals, aged 20-38, were arrested together in a Garda raid on their house in Letterkenny, Co. Donegal on 14 July 2011. Mobile phones, condoms, sexual services translations and €2,030 in cash was seized. Three of the woman had arrived in Ireland a month ago. Two had only arrived two days ago and had not yet seen any clients. All five said they came from the same area in Romania and came of their own free will. Their solicitor said they had known each other for years, three had children and were separated at a very young age, and they were all deeply embarrassed, frightened and just wanted to go home. He said that they would get the first flight as soon as their passports were returned and not come back. The judge ordered forfeiture of bail, seized cash and sought additional charity donations (to Our Lady’s Hospital Crumlin and Donegal Rape Crisis Centre, then applied the Probation Act. 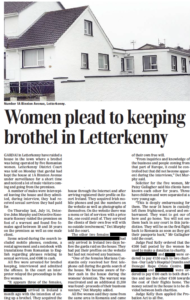