Claudio A. C. (40), Dulce G. G. and Vanessa T. A. (23) pleaded guilty to operating a brothel in Cork on 12 March 2010 through an interpreter. The judge refused an application for legal aid but said the women could have their cases adjourned if they wanted to pay for representation. The women opted to go ahead without representation. A Garda gave evidence the women had been contracted to work as prostitutes by a third party who they paid 50% of their earnings. The third party had arranged flights for them and set them up in an apartment. Dulce G. G., a Dominican national, said she had not come to Cork to work as a prostitute, but admitted she did end up working as a prostitute. Claudio A. C. and Vanessa T. A., Colombian nationals, were mother and daughter. All three were fined €1000 each and given one month to pay or 90 days in prison in default. The judge warned, should they come before the courts again, they could expect to go to prison. 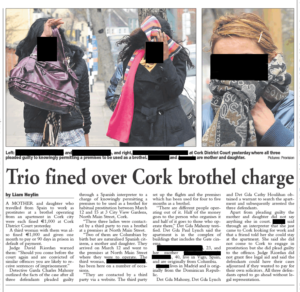