Clementina O. F. (28), a Nigerian national, was arrested alongside another woman at a house in Middleton, Co. Cork on a date in July 2011 and taken to a Garda Station, where she admitted the offence of brothel keeping. The arrest followed surveillance. A detective told the court he stopped two men after leaving the address and in statements the men said they obtained sex from two ladies in exchange for money. Clementina O. F. had no passport or papers and there was difficulty in ascertaining her identity. There was discussion over the possibility of Clementina O. F. being a victim of trafficking. However a detective told the judge she was not co-operating and Gardaí were satisfied at this stage that she was not a victim. Her solicitor said she came from a sheltered background in Nigeria, could not go back and was living from hand to mouth. The judge imposed a €500 fine. 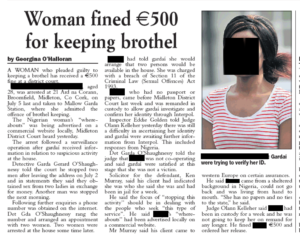