Cristina B. and Cristina Z.

Cristina B. (19) and Cristina Z. (19), both Romanian nationals, of no fixed abode, were charged with running a brothel at an address in Sligo on 27 April 2011. The court heard an undercover Garda had been offered sexual services. A Garda witness said they were “minor players” in the operation having been set up by somebody else. A sum of €850, a laptop, a mobile phone, condoms and other items of a sexual nature were found. Both defendants had no previous convictions. Cristina Z.’s solicitor said she’d only turned to this when unable to get other work and it was her intention to return to Romania. The judge fined them €200 each out of the €850 that was seized and ordered that the remaining €450 be returned to them to allow them to leave the country. 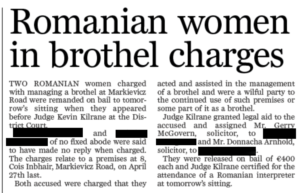 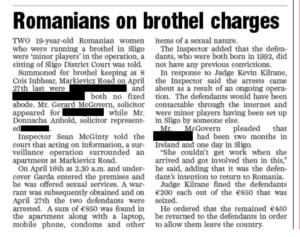