Elena C. and Daniela H., both Romanian nationals, pleaded guilty to brothel keeping at an address in Carrick-on-Shannon, Co. Leitrim on a date in September 2013. They were each sentenced to four months in prison. A “substantial amount of cash” was seized from them. The judge instructed that this money be donated to Ruhama. 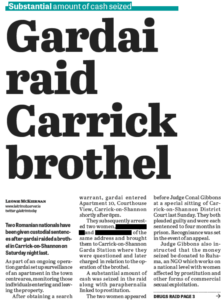