Daniella C. and Daniella I.

Daniella C. (19) and Daniella I., both Romanian nationals, were charged with knowingly allowing a premises to be used as a brothel in Letterkenny, Co. Donegal on 10 December 2016. Also charged was and Florin N., who had been on the premises at the time of the raid and was said to be the boyfriend of Daniella C. and in control of the monies in the apartment. All three were arrested by detectives following a surveillance operation. A Garda witness said they approached a number of men leaving the premises at different times and took statements from them confirming the apartment was being used for prostitution. When Gardaí raided the premises one of the women was found engaging in sexual activity with a client in a bedroom and it was evident from a search of the premises that it was being used for habitual prostitution. A total of seven mobile phones and €810 was seized, as well as £120 sterling and 80 Romanian leu (approx €50). Gardaí said they were satisfied that the women were not being trafficked and were operating independently. A solicitor for the three defendants said they were from a very poor part of Romania where the average weekly wage was just €50. Daniella I. was said to be using the money to support her mother and young child in Romania after being abandoned by her husband. It was said that all three had plans to leave the country. The court was told that there was a bench warrant out for the arrest of Daniella I. from Tralee District Court recently for a similar offence. Daniella C. was said to be of no fixed abode. The judge applied the Probation Act to all three. All seized cash was forfeited to the State. Daniella I. was released on her own cash bail of €500 cash to appear at Tralee District Court at a later date. 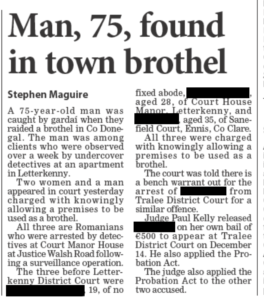 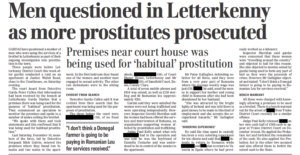