Daniella I. (28), a Romanian national, admitted brothel keeping in an apartment in Tralee, Co. Kerry on 9 February 2015. A Garda witness said the apartment was under surveillance and a number of men were seen entering and leaving. Gardaí then entered the apartment and found Daniella I. and a friend. Daniella I. admitted she was working as a prostitute. The court heard that earlier that week she had been before the courts in Letterkenny regards working as a prostitute there. Having been brought before Tralee District Court on the foot of an outstanding bench warrant, her solicitor said, after her arrest in Tralee, she had returned to Romania where her 5 year old son lives with her mother. She then arrived back in Ireland in September. She would now return to Romania and never come back, her solicitor said. The judge fined her €275 and gave her 12 months to pay. 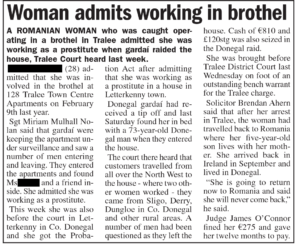