Described in court as prostitutes, Denisea Ioana C. (19) and Maria G. (22), both Romanian nationals, pleaded guilty to operating a brothel in an apartment in Limerick. A Garda witness said they were not acting under duress. The court heard when Gardaí raided the apartment they found 8 mobile phones, €500 cash and “brothel paraphernalia”. The judge imposed 6 month sentences on both which he suspended on condition they leave the area within 48 hours. He directed the €500 be given back to them in order to enable them to leave the country. 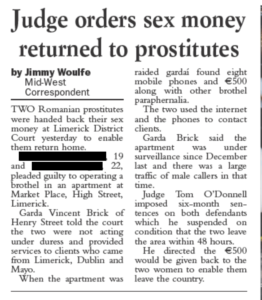