Eduardo L. (32), a Brazilian national, pleaded guilty to keeping a brothel in Virginia, Co. Cavan on 1 August 2013. On that date Eduardo made a statement admitting the offence. Following hearing that Eduardo L. was engaging with the HSE Women’s Health Project the judge ordered her to immediately pay €500 to Ruhama and agreed to then apply the Probation of Offenders Act. Co-accused alongside her was Andrea Leianna S. R. An update on the outcome for Andrea Leianna S. R. could not be found. 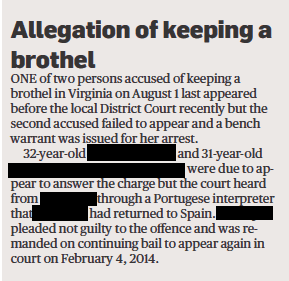