Mikaela N. (39) and Elena F. (36), both Romanian nationals, were arrested and charged with brothel keeping by Gardaí on the weekend of 18/19 February 2017. Both were working in the same apartment in Letterkenny, Co. Donegal where €60 cash was also found. Gardaí said that each of the women had also previously been before the courts on brothel keeping charges. The solicitor acting for both women said they admitted prostitution and had plans to fly to Spain where it was legal. He stated both women were under pressure from back home in Romania to make money. The judge fined the women €500 each and ordered the destruction of their mobile phones. 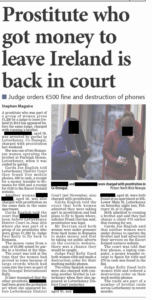