Elson M. (27), a Brazilian national, Maria C. (21), a Hungarian national, Rosalia M. (33), a Spanish national and Yessenia R. (27), a Nicaraguan national, were charged with brothel keeping at an address in Cork on 17 February 2011. A Garda testified that the four women were arrested as a result of an ongoing investigation into prostitution and it was established the women were operating a brothel out of their apartment. The four women all pleaded guilty to a charge of managing a brothel. They had no legal representation in court and declined the offer to say anything in their defence. They had no previous convictions in Ireland. The judge imposed a fine of €800 on each. He gave them a week to pay or else 90 days in prison in default of payment. 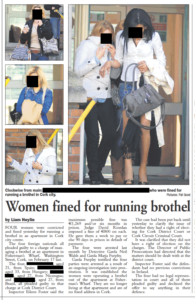