Flor Yeni M.H. (42), a Spanish national, and Jose H. (44), a Brazilian national, were arrested in a raid on a house in Letterkenny, Co. Donegal on 22 October 2012. Both were described as prostitutes. Jose H. was described as male. Gardaí gave evidence that Jose H. was found dressed in female underwear and a blonde wig. The court also heard that Jose H. was HIV positive. The defence said both Jose H. and Flor Yeni M.H. had been trafficked into prostitution by brothel bosses in Dublin, they were victims, poor people who had looked to better themselves and been forced into prostitution. He said Flor Yeni M.H. suffered from the side effects of a stroke and came to Ireland earn money to send her two children to college. Jose H. was very vulnerable and had no English. He said through an interpreter that he was suffering from HIV and wanted to return to Brazil. Both had return tickets. The judge released them both having signed a bond to keep the peace. A health warning was issued and published in newspapers re Jose H.’s HIV status. 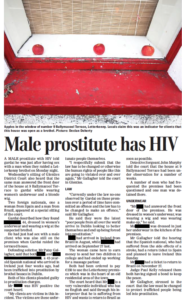