Florentina P. (35), a Romanian national, pleaded guilty to running a brothel in Monaghan on 15 February 2010. A Garda told the court that Gardaí raided her apartment and seized a number of items they believed were involved in the running of a brothel. A laptop was seized, along with €800 and £700 in cash. Florentina P. was jailed for 3 months by the judge after she could not find the €1,000 bail surety which would have resulted in her receiving a suspended sentence. Following this Florentina P. was reported to have asked the judge: “If I am jailed, who is going to look after my nine-year-old child?” The judge replied: “That is not my problem.” Her solicitor appealed for the return of the cash, “so that she can leave Ireland and never return”. However, this was rejected by the judge. 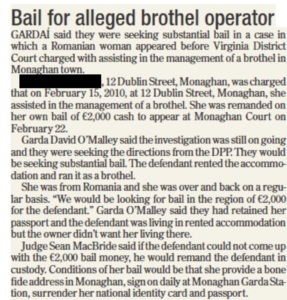 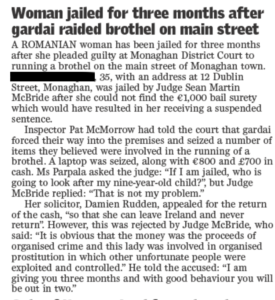