Florintina C., a Romanian national, and Victoria O. (36), an Italian national originally from Nigeria, pleaded guilty to keeping a brothel at their Galway apartment on 8 September 2016. A Garda witness said they had been informed that a brothel was being run at the address and spoke to some men seen leaving who admitted they had engaged in sexual intercourse in exchange for cash. Florintina C.’s defence said she was victim of economic circumstances and had come to Ireland to make more money as she has a daughter. Victoria O.’s defence said she was poor and had third level qualifications and no previous convictions. Both were no longer living in Galway but had returned for the case. The judge noted that the women were not trafficked or forced, but commented that criminals usually run these operations and men making money from these types of operations as well as men seeking sexual services should also be prosecuted. The judge reportedly said “Trafficking is different. Those women have no choice, but that is not the case here” and also asked Victoria O. if she realised that she was setting her own gender back by hundreds of years by engaging in this type of activity. Both were fined €800. 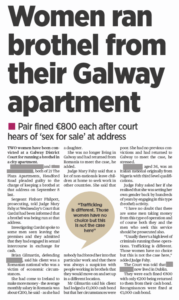