Helen D. C. (22), a Brazilian national, pleaded guilty to brothel keeping in Limerick on 25 August 2009 and apologised. The court heard she had come to Ireland to study English and began working as a prostitute as a brief summer job because of her very difficult financial circumstances. Gardaí called to her flat following a complaint by the auctioneer who leased her the flat. She admitted working as a prostitute and that she was using the flat as her place of business. She had €3,170 in cash on her and said €1,620 of this was the proceeds of her work as a prostitute and the remainder belonged to a relative. Her solicitor said she had only begun working as a prostitute two weeks earlier due to “exceptionally difficult” financial circumstances. The judge ordered that the €1,620 was forfeited to the State and fined her a further €500 to be taken from the remaining money seized. 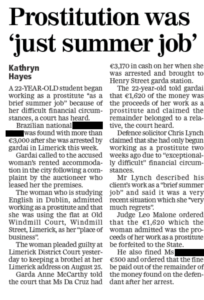