Iona A. E. (20) and Ramate V. (25), both Romanian nationals, pleaded guilty to brothel keeping at an apartment in Limerick on 20 May 2010. A Garda told the court they were arrested at their apartment and there were a number of “customers” present when the search was conducted. 8 mobile phones, a laptop and €300 in cash was seized. Both women had left Ireland previously after being arrested on suspicion of prostitution. The women’s solicitor said they had been exploited as they came from very poor backgrounds and described their situation as “desperate”. They had young children who were living with family members in Romania. The judge sentenced both to six months in prison, suspended on condition they leave the city within 72 hours and stay out of trouble for a year. He also ordered €200 of the money seized should be returned to them to help them make travel arrangements. An application allowing Gardaí to retain the mobile phones and laptop was granted. 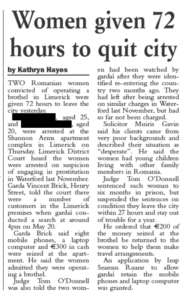