Judit M. D., a Brazilian national, and Tania G. F., a Spanish national, were arrested and charged with running a brothel at an apartment in Carrick-on-Shannon on 14 May 2012. A sum of money was also seized. They appeared in court where the investigating Garda said there was no evidence either woman was forced into the sex industry and all evidence pointed to them being independent operators working for themselves. Both Judit M. D. and Tania G. F. pleaded guilty. Warrants were later issued for their arrest after they failed to appear for sentencing. Judit M. D., of no fixed abode, appeared at a later date and the judge said she had one week to prove she could find another source of income or she would be jailed. He said she could not remain in the country on an invisible income and unless he was satisfied she had given up prostitution he would send her to prison. 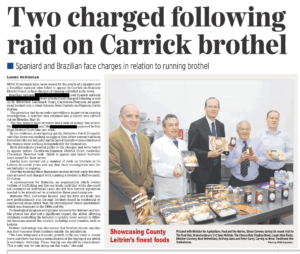 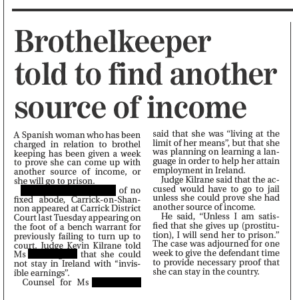