Juscileide D.S. (33) and Ricardo C. (31), both Brazilian nationals, pleaded guilty to keeping a brothel at an apartment in Cork on 06 October 2012. A Garda witness said he found a large amount of condoms and sex toys, €500, a laptop and 3 mobile phones. The Garda witness also stated that Ricardo C. and Juscileide D.S. said they were working as escorts. Their solicitor said both were Brazilian but met in Spain. He said Ricardo C. was a qualified hairdresser and Juscileide D.S. was sending money home to Brazil to her sister who has 5 children. The judge fined each defendant €300 giving them 1 month to pay and ordered the forfeiture of the computer and phones. The judge agreed to an application from the defence solicitor to allow the €500 seized to be used to buy flights to Spain once the remainder was then forfeited to the state. 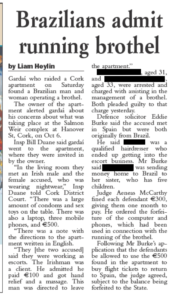