Romeyka D.S.O. (28) and Katia C.S. (57), both Brazilian nationals, were arrested at their apartment in Sallins, Co. Kildare on 17 October 2012. Gardaí gave evidence they found cash, scented candles, lubricants, condoms, a sex toy, plus used condoms and tissues. A man present had made a statement that he’d contacted the women via a massage advert on an escort website. One woman initially claimed they offered massage, but admitted it was with a “happy ending” when the used condoms were pointed out. Both women then admitted they were offering sexual services. The defence argued that, while all the evidence pointed to the women being prostitutes, the prosecution had failed to prove they were keeping a brothel. The judge went with the Gardaí’s argument that the women could fulfil both roles, as prostitute and brothel keeper. He said a brothel is a building more than one woman uses for the purpose of fornication. Both were sentenced to 4 months in prison and fined €1,000. 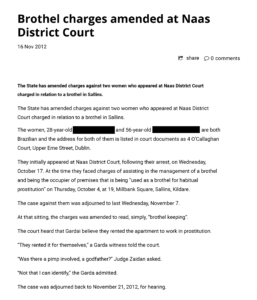 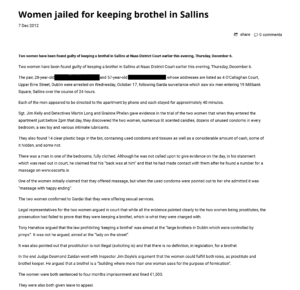