Lenuta C., Ramona M. and Luiza H., all Romanian nationals, were charged with keeping a brothel at an apartment in Cavan. Each was remanded on bail of €500. At a later court date a Garda said if they were willing to give an undertaking to leave the jurisdiction and not return he would accept that. He suggested that their bail money be donated to Ruhama. The women agreed to this. The judge directed that the bail money be given to Ruhama and said he would strike the matter out. 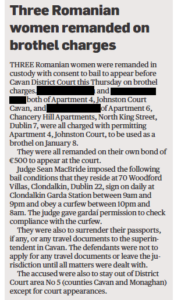 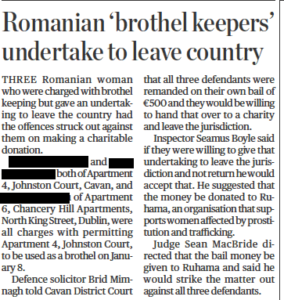