Maria V. (23), a Romanian national, pleaded guilty to keeping a brothel at an apartment in Limerick on 16 January 2017. The court heard she was arrested after a Garda search, where almost €1,500 in cash was also found, and she made admissions when interviewed. Maria V.’s solicitor said she came from a decent family in Romania but was forced to abandon her studies after her family home was destroyed in a flood. The solicitor went on to say that Maria V. regretted her actions and was extremely anxious to return to her family in Romania. She had been evicted from her apartment following her arrest and had already booked a flight home. The judge agreed to strike out the matter given the circumstances and ordered that half the money seized be paid to the court poor box and the other half returned to Maria V. to enable her return to Romania. 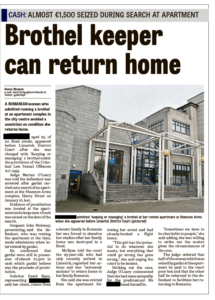