Marian B. and Mihaela P.

Marian B. (29) and Mihaela P. (22) were two of six Romanian nationals arrested in a Garda swoop on an apartment in Tralee, Co. Kerry on 15 February 2013 following an undercover operation into suspected prostitution. The six persons arrested were charged with brothel keeping. Mihaela P.’s solicitor said she had no assets, no bank account and was not receiving welfare. The court heard the brothel served male and female clients. Mihaela P. and Marian B. pleaded guilty. Their solicitor said they came from a very difficult background and had told Gardaí they’d made very little money. Both were give €500 fines. Bench warrants were issued for the other four persons who had not appeared in court. 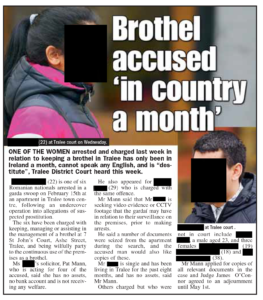