Michelly D. A. (29) and Roseangela T. (38), both Brazilian nationals, pleaded guilty to brothel keeping in Sligo on 24 June 2010. The court heard they were arrested after a team of 10 Gardaí raided their apartment. The raid followed surveillance where a large number of men were seen going in and out of the apartment a regular intervals. Gardaí found the two women in the apartment and one male upon whom a sex act was being performed. €1,485 in cash was seized as well as mobile phones and laptops. Gardai also seized seized condoms, dildos, whips, handcuffs and sex toys. All three were taken to a Garda station where the two women were charged with brothel keeping. At a later date in court their solicitor said it was their intention to leave the country. They were convicted and fined €300 each. 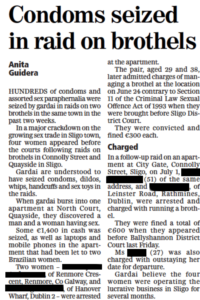