Mihaiela G. (33), a Romanian national, was charged with running a brothel in Tralee, Co. Kerry on 5 June 2017. It was reported that Mihaiela G. had been engaged in prostitution at the address. She was convicted and fined €275. Another Romanian woman, Florina A., who had been found by Gardaí in the same house as Mihaiela G., appeared in court alongside Mihaiela G. and was also convicted of brothel keeping for allowing her home to be used as a brothel. It was not clear whether Florina A. was also a sex worker, but the news report did say Florina A. did not benefit financially or materially from the brothel. 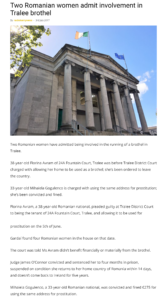