Raul A. (40), a Venezuelan native with a Spanish passport, was accused of brothel keeping at an address in Cork on 12 August 2011. The court heard Raul A. was a transwoman and saving for surgery.
Gardaí said she was dressed in lingerie when they raided her apartment. Uniforms, condoms, sex toys and €13,000 and £700 (€846) in cash were found. She denied brothel keeping. Her escort advert was shown in court. The defence argued the word brothel was not defined in law, but the judge said: “Where a person supplies sexual services for money or other material consideration, that is the plain meaning in the English language.” Raul A. insisted much of the money seized was from her other job of hairdressing. The judge said the money could be pursued via the Police Property Act and issued a €500 fine and three-month suspended sentence. Raul A. later appealed the conviction having by that point changed her name to Melanie. The judge said, in view of “the flagrant attitude to the court” he was dismissing the appeal and removing the suspension on the jail term. Following submissions from her barrister, the judge agreed to put the appeal back, but threatened prison if there were further difficulties. 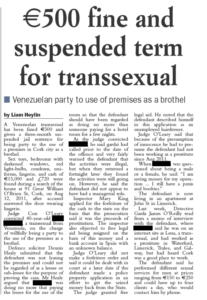