Raymonda L. M. and Yaxi D. P. V., both Spanish nationals, were convicted of brothel keeping at their home address in Carrick-on-Shannon, Co. Leitrim on 19 October 2013. After leaving Ireland both received the Probation of Offenders Act. €150 and 3 mobile phones seized from them was forfeited to the State with the judge commenting that it was “money for Mr Noonan” (Michael Noonan was then Finance Minister). 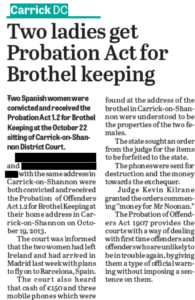