Saray B. M. (28), a Spanish national, was charged with brothel keeping after her apartment in Westport, Co. Mayo was raided by Gardaí on 27 January 2009 and they found her with a semi-naked male who said he’d paid her for sex. Gardaí also found €363 and £120 in cash, sex toys and other paraphernalia. Saray B.M.’s solicitor told the court she was very much under the influence of a madam, who benefited substantially from the services provided by her. A Garda witness acknowledged the warrant was in the name of another Garda and and another woman was named on the warrant, and this woman was believed to be the madam, but the Garda said this woman was not present on the day they’d visited. Saray B.M.’s solicitor said she was a heavy cannabis user and admitted she was still providing the “same services” from her apartment. The judge convicted her and imposed a €500 fine and the forfeiture of the €363 and £120 in cash seized. 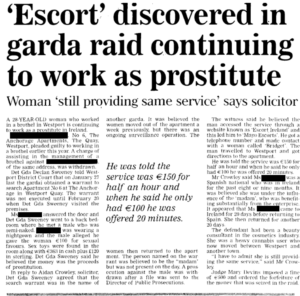