Silvia S. and Simona B.

Simona B. (30) and Silvia S. (31), both Slovakian nationals, pleaded guilty to brothel-keeping in a self-catering cottage adjoining a Killarney hotel on a date in May 2011. The court heard the women were “self employed”, there was no question of trafficking, but they were in very dire, poor circumstances at home and out of economic necessity they had moved around Ireland since January. The women had not understood that their activity was illegal. They had more than €8,000 in their possession when arrested. Both women gave an undertaking to never return to Ireland again. The judge refused a plea from their solicitor to allow a contribution to the court poor box to avoid conviction. The judge said the matter was a criminal offence and carried a maximum sentence of six months in jail. He also said he would not use the term “self-employed” to describe their activity. He imposed a fine of €850 on each. 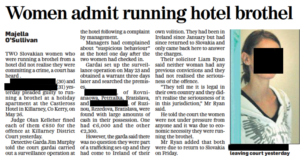