Sefania M. and Sirin A.

Sefania M. (21) and Sirin A. (23), both Romanian nationals, appeared in court charged with brothel keeping at an apartment in Letterkenny, Co. Donegal on January 19 2017. The court heard €600 in cash had been found along with Western Union receipts showing that €18,000 had been sent back to Romania over a 3 week period. Both women admitted operating a brothel. Gardaí said they were satisfied both women were not under pressure and were operating the brothel of their own free will. The solicitor for the women said both were sending money back to their families in Romania. Both were single mothers and Sirin A., a widow, had been paying for her child’s schooling. He said both women had assured him they would return to Romania within 48 hours and requested some of the €600 cash seized be returned in order to pay for flights. The judge refused this request and ordered that the seized cash be forfeited to the state and fined each woman €250. 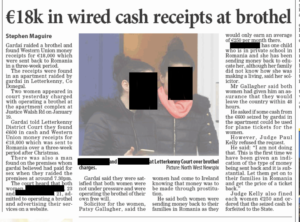 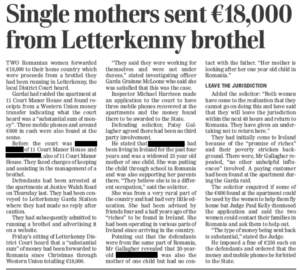