It was reported that on October 12 2011 Gardaí raided a brothel in an apartment in Athlone, Co. Westmeath and arrested two 26-year-old Lithuanian women who gave addresses in the UK. The two were convicted in court on the same day, and fined €250 after giving assurances they would leave for the UK immediately. It was said that they had only been in business for two days. 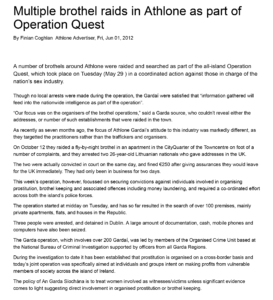