Xavier S. V. (32), an Ecuadorian national with a Spanish passport, pleaded guilty to brothel keeping at an address in Cavan town on June 10 2011. Gardaí had searched his apartment and found him entertaining a male companion, who admitted paying €80 for the privilege of being there, and paraphernalia which suggested the premises was being used for sexual purposes. It was said that Xavier S. V. fully cooperated with Gardaí. He apologised fully for his actions and said he didn’t realise they were illegal in Ireland. The court heard Xavier S. V. had run a business in Spain but ended up with a lot of personal debt. Gardaí said a total of €1,300 was found in the apartment and the judge directed that this money be paid over to three charities. He then imposed a six months suspended sentence and ordered the destruction of the items seized. 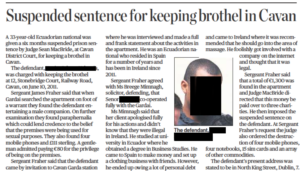